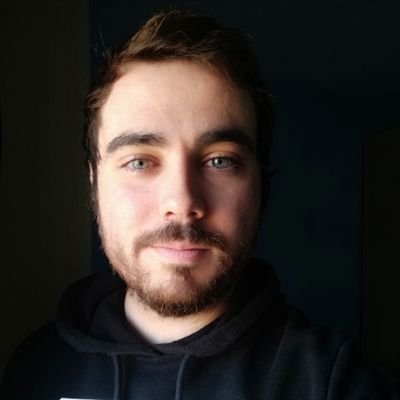 Hello, it’s been a long time since I have written a gamedev article, been busy with life.

If we talk about trending engines, we have to talk about Unreal Engine 5.

This brand new version of Unreal includes a number of features that enhance the experience of working with the engine. Such as Nanite, which with an avant-garde application of virtualized geometry technology, can allow for taking significant shortcuts when creating game-ready photorealistic assets.

However, these new goodies shall present developers with new challenges. For example, in Nanite we get presented with the following difficulties:

Most of these tools entail a shift in the way the industry approaches traditional problems. With Nanite, artists no longer need to go through the tedious retopology phase, which implies a reduction in the production cost for the development of photorealistic assets, as the length of the workflow, and thus the hours required for an asset to be considered game-ready have been considerably reduced.

The industry will of course adopt these changes. So instead of disregarding them because - “I’m so used to the old workflows and I don’t care” - we should always be down to explore new technology and study the new challenges as they come to keep ourselves up to date and, of course, relevant to the industry.

Another of these overwhelming new tools that has been around for a while is the Gameplay Ability System. I’ve seen lots of skepticism surrounding this tool, such as:

Unfortunately, the story gets repeated, most of the disdain and criticism comes from people that haven’t worked in depth with the system. In this post, we’ll demystify and comment real pros and cons of the system.

The gist of it

What’s the Gameplay Ability System? The answer is simple, an ability framework which enables the creation of stateful systems through the usage of gameplay tags, abilities and mutable gameplay attributes. It is also complemented by a gameplay cue system for those juicy visuals. Let’s elaborate a tiny bit on them:

And here is where we see the first issue:

So… Something as “simple” as casting an ability is becoming complex? No… no, not really, who told you that? That’s not really the complication of the system. The next Section elaborates on how easy is to implement an ability with casting using the concepts explained above.

The pros: Implementing an ability is easy, I swear

To make things simpler and fairer, we are going to explore the Light Dart ability blueprint from the Valley of the Ancient Sample provided by Epic.

This ability is feature complete as it adds Tags, Cues, mutates some Attributes and employs the controllability offered by the ability system.

Abilities expose a section in their Class Default Object (CDO) to define a series of conditions and actions to perform using the Tag system when attemping an ability activation.

In summary, this ability does the following:

As we can see, the gameplay tag system shifts the paradigm towards stateful systems by providing a simple controllability interface in our abilities. In traditional systems this would be equivalent to a long and complicated if-else boolean statement chain.

Once the ability goes through its initial phase, the event ActivateAbility gets called. Let’s see the first phase of the ability. 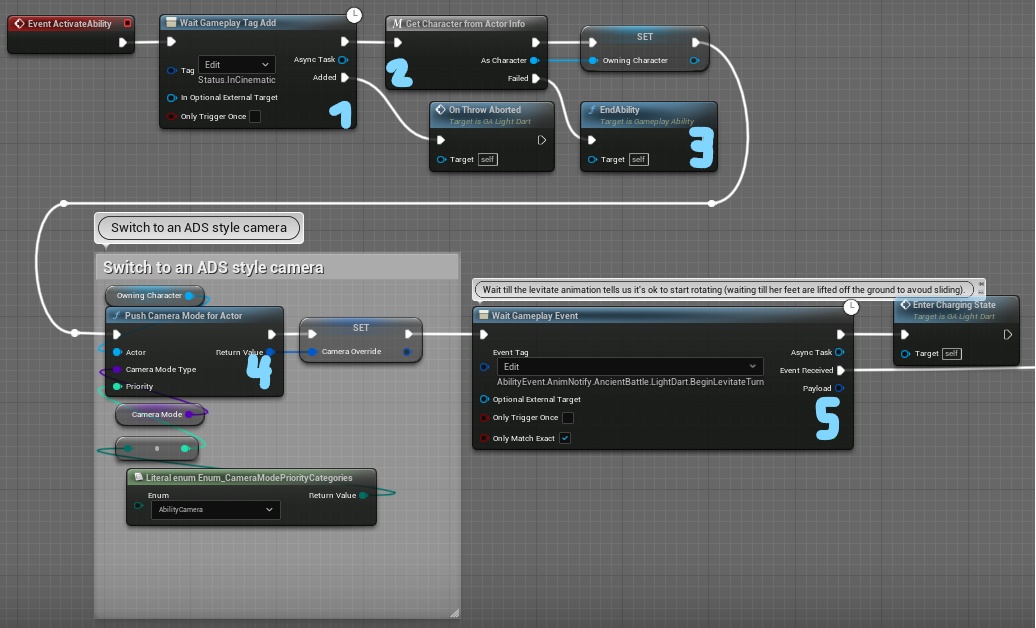 Following this, the character begins to levitate, spawning particles and triggering sounds, for that, this project uses the gameplay cue system. When this happens, Echo reduces their movement speed and starts casting the Light Dart. 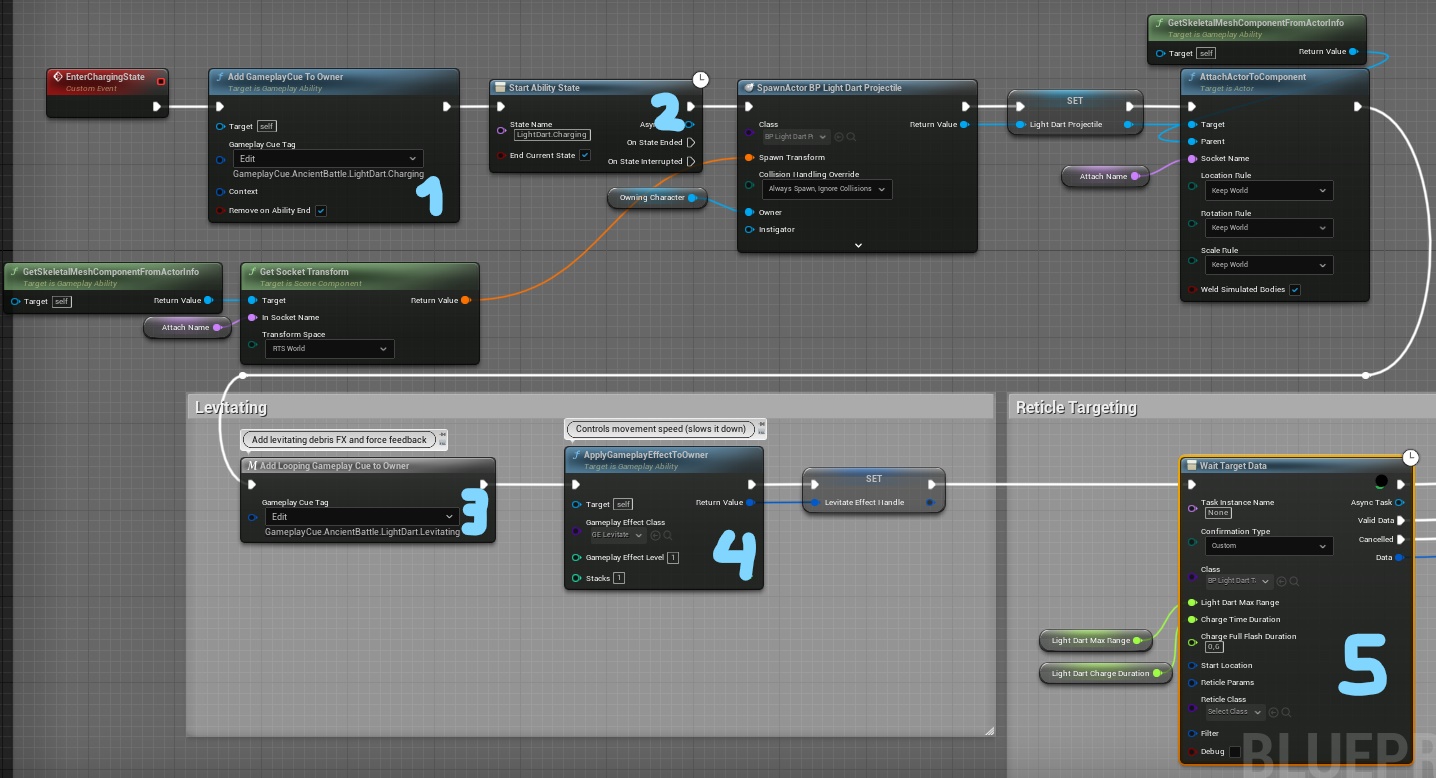 Assuming the target actor returned valid data, we can proceed with the launch of the projectile.

And that’s about it. The graph has more to it, but this is the essence of the implementation of the ability. Still, If you want to learn more about this specific ability you can download the Valley of the Ancient Sample by Epic Games.

As you can see, implementing an ability isn’t that complicated once you grasp the basic GAS concepts. There are more advanced concepts such as Stacking or Ability costs, but these are simply additional features to make your life easier. If you want to learn about them, take a look at the resources Section at the bottom of this article!

With the release of Unreal Engine 5.0 Epic released Lyra, an official multiplayer feature-complete example that we can look at and learn good practices about GAS. Lyra is a modular sample project using techniques already explored in Fortnite. Learn more about it here:

The cons: Not so plug-and-play

Using GAS and creating abilities is easy. That’s clear. Then… what’s the problem?

Setting up GAS involves writing hundreds of boilerplate lines of code. Literally hundreds. The system is not really plug-and-play, although some Epic staff have recently commented that they would like to make the setup more user friendly so that people can start using the system without spending hours adding initialization code.

Also, multiplayer games require to do pretty specific setups to simply initialize GAS. For example some games might require adding the component in the PlayerState, while some others in the Character (see Dave Ratti from Epic’s answer to community questions #5):

One example I found recently was binding an ability to an input action using the Enhanced Input plugin. But really, most of the time you feel like you are work-arounding issues setting up the system to work.

But once it’s setup…

Once set up, the system is quite easy to use and intuitive. Game designers will love it! And scaling it up is quite easy.

Like everything else, when it comes to code design, it is just a matter of learning the tools provided by the system and using them appropriately to solve different problems (see Dan’s GASDocumentation):

Let’s now list some resources that helped me getting introduced to the Gameplay Ability System.

As always, the best recommendation is to check the engine’s source code.

You may also enjoy 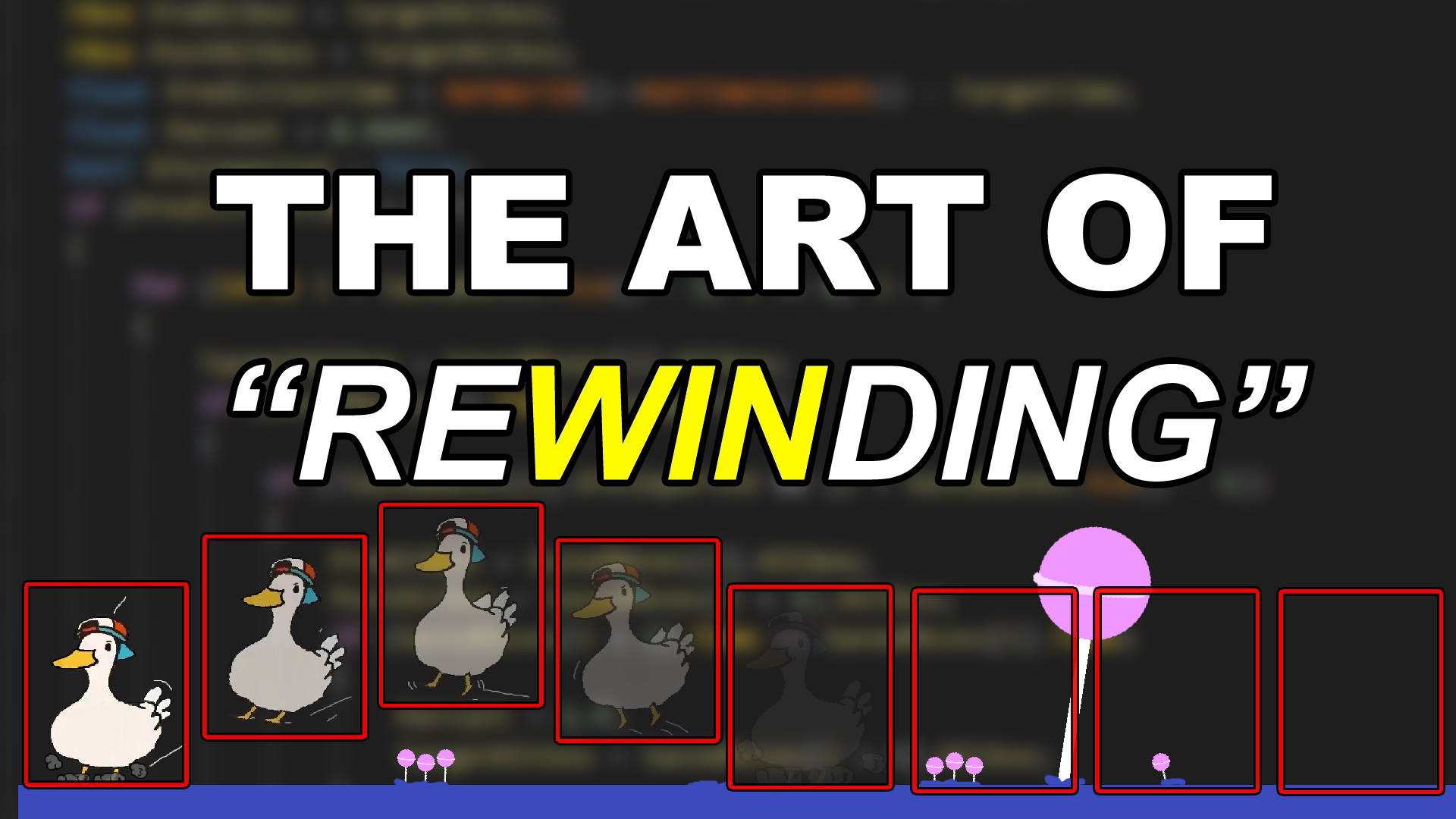 In this post you’ll learn the principles about network rewinding, and we’ll provide a very simple reconciliation implementation for Unreal Engine. 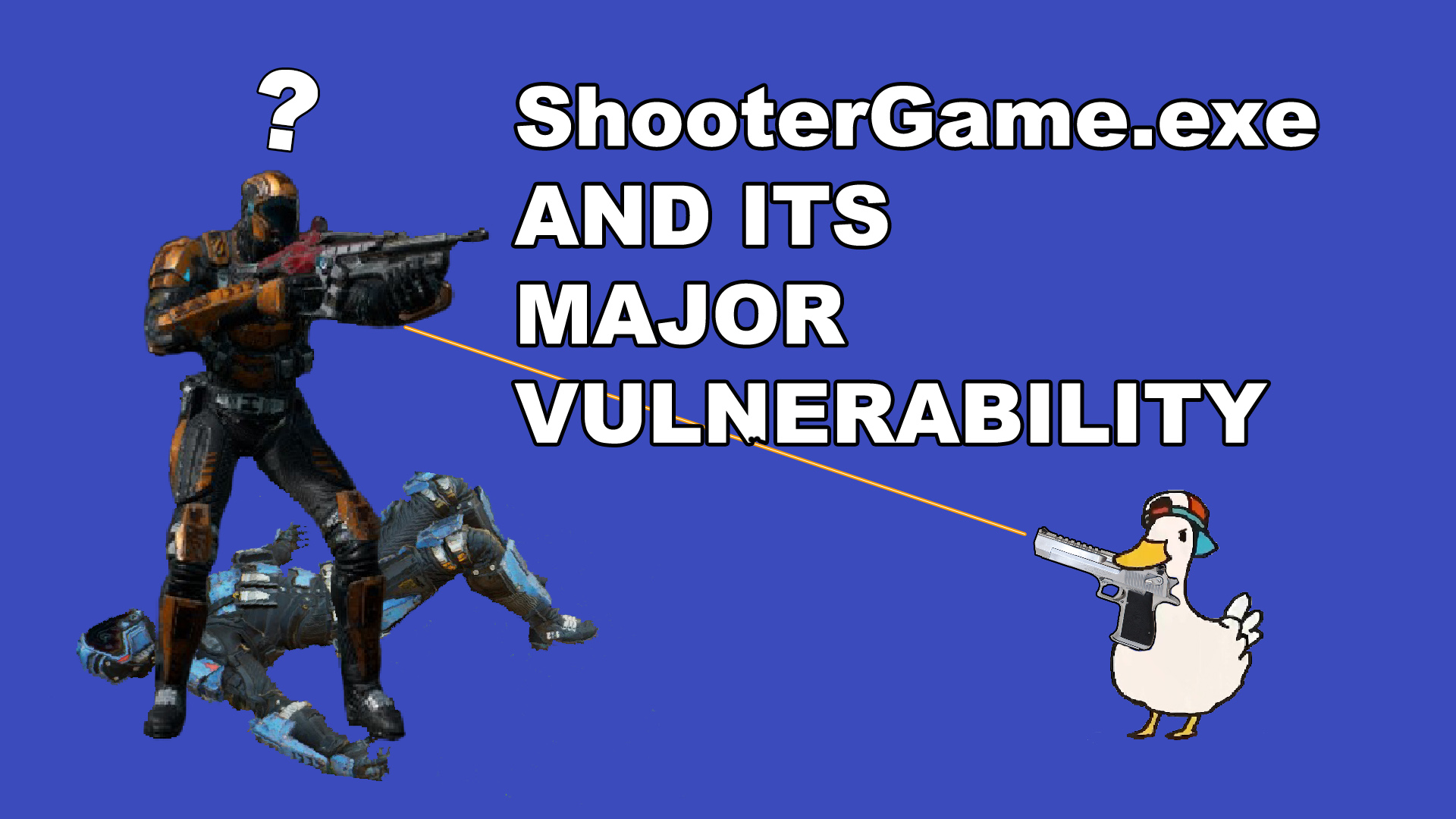 The ShooterGame vulnerability that was spread to many games

In this post you’ll learn about the major vulnerability of ShooterGame that got spread to many games. 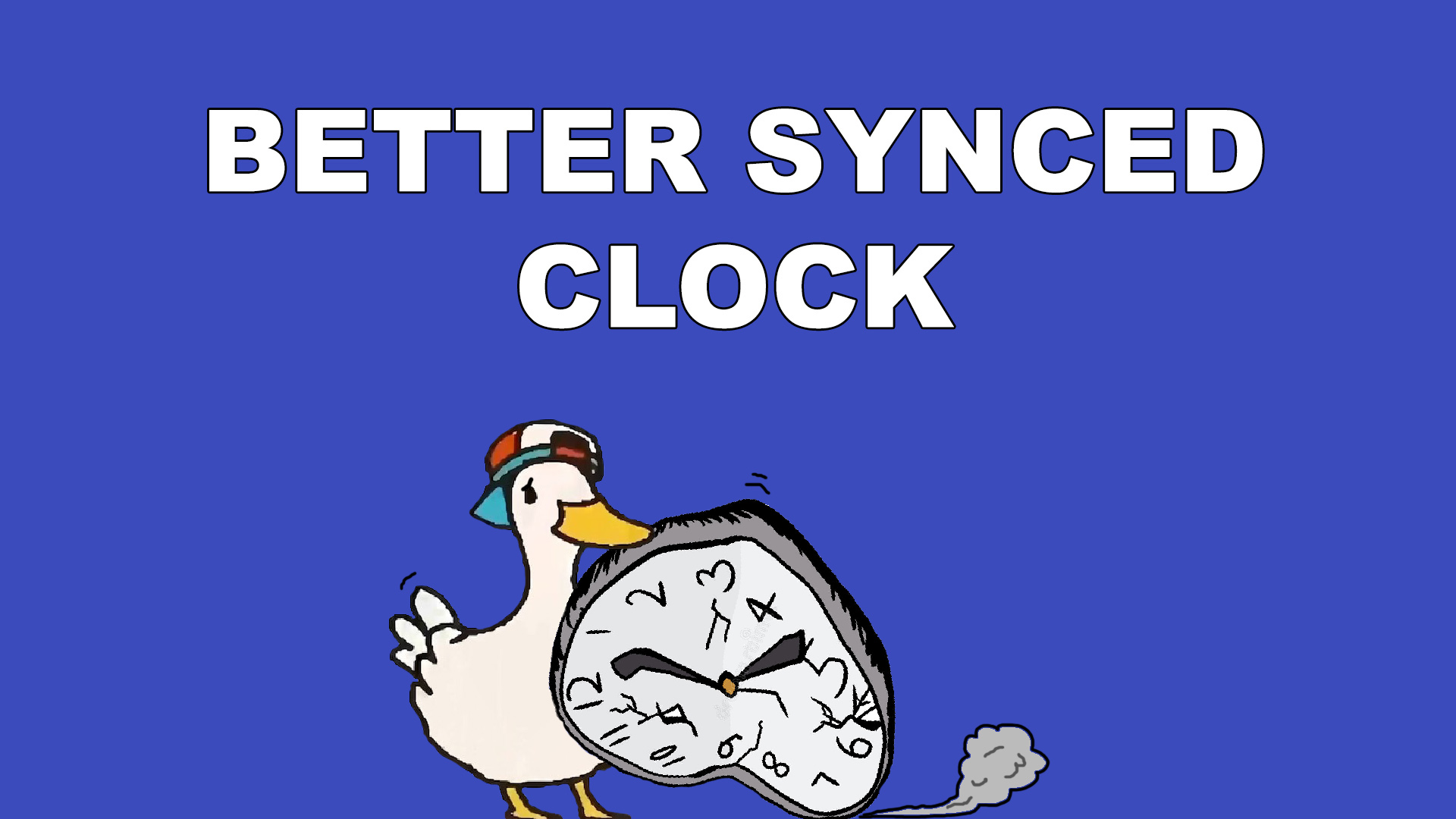 Do you want to have a better synced clock in Unreal Engine without removing the default “synced” clock? This is your post! 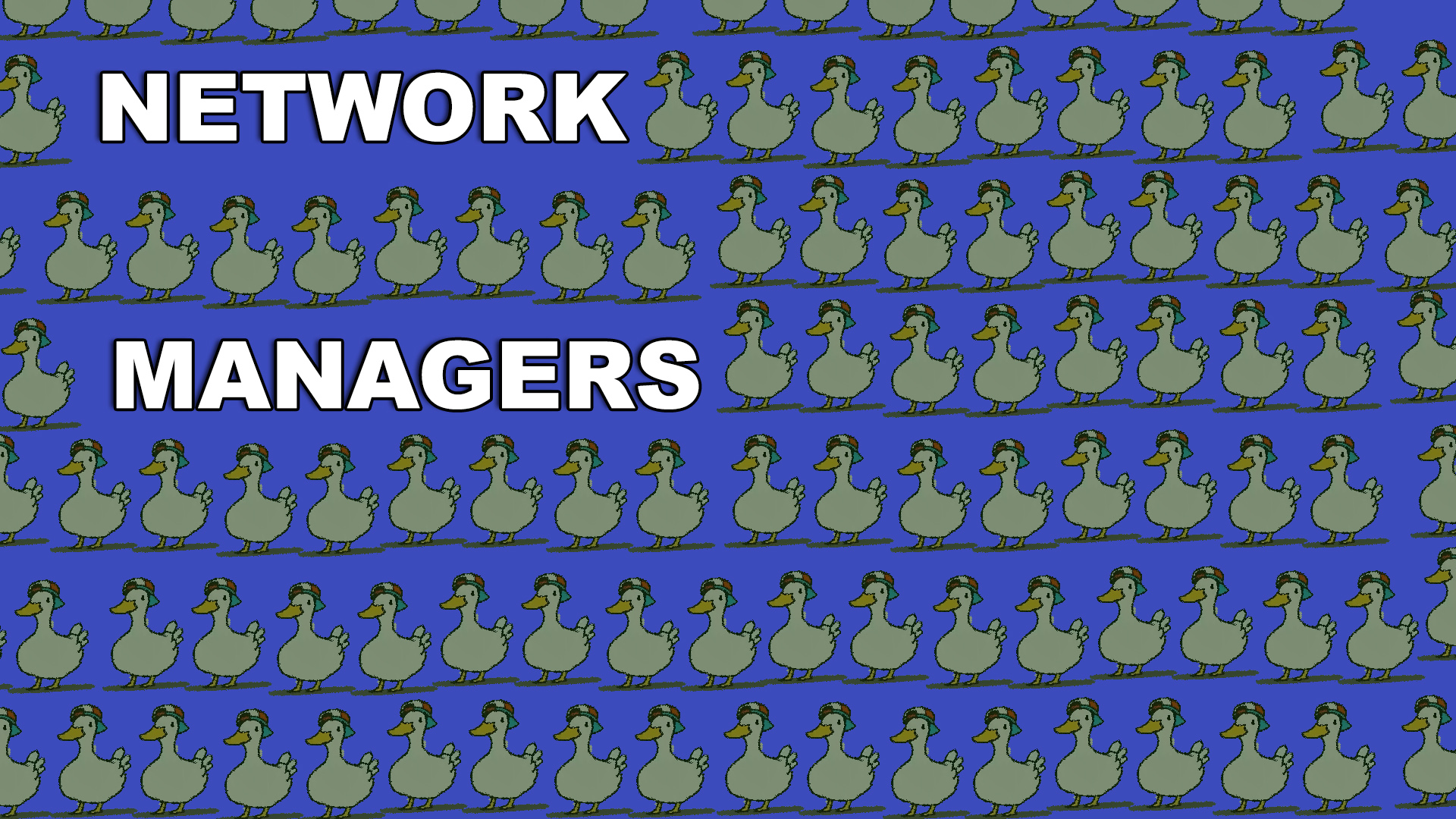 How to replicate hundreds of actors without replicating them.